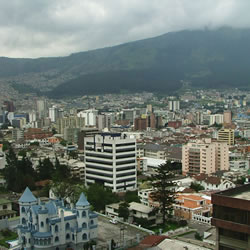 San Francisco de Quito, most often called Quito, is the capital city of Ecuador in northwestern South America. It is located in north-central Ecuador in the Guayllabamba river basin, on the eastern slopes of Pichincha, an active stratovolcano in the Andes mountains. With a population of 1,397,698 according to the last census (2001), and, as estimated by the municipality, approximately 1,504,991 in 2005, Quito is the second most populous city in Ecuador, after Guayaquil. It is also the capital of the Pichincha province and the seat of Metropolitan District of Quito. The canton recorded a population of 1,842,201 residents in the 2001 national census. In 2008 the city was designated as the headquarters of the Union of South American Nations.

The elevation of the city’s central square (Plaza de La Independencia or Plaza Grande) is 2,800 m (about 9,186 ft), making Quito the second-highest administrative capital city in the world (after La Paz, Bolivia), and the highest legal capital (ahead of Sucre, also in Bolivia, and Bogotá, Colombia).

The central square of Quito is located about 25 km (15 miles) south of the equator; the city itself extends to within about 1 km (0.6 miles) of zero latitude. A monument and museum marking the general location of the equator is known locally as la mitad del mundo (the middle of the world), to avoid confusion, as the word ecuador is Spanish for equator.

Quito, along with Krakow, were the first Cultural Heritage Sites declared by UNESCO in 1978

Quito’s origins date back to the first millennium, when the Quitu tribe occupied the area and eventually formed a commercial center. According to Juan de Velasco’s 1767 book Historia del Reino de Quito, the Quitu were conquered by the Caras tribe, who founded the Kingdom of Quito about 980 CE.

Indigenous resistance to the Spanish invasion continued during 1534, with Diego de Almagro founding Santiago de Quito (in present day Colta, near Riobamba) on August 15 of that same year, later to be renamed San Francisco de Quito on August 28. The city was later moved to its present location and was refounded on December 6, 1534 by 204 settlers led by Sebastián de Benalcázar, who captured Rumiñahui and effectively ended any organized resistance.[6] Rumiñahui was then executed on January 10, 1535. On March 14, 1541, Quito was declared a city and on February 14, 1556, was given the title Muy Noble y Muy Leal Ciudad de San Francisco de Quito (“Very Noble and Loyal City of San Francisco of Quito”). In 1563, Quito became the seat of a royal audiencia (administrative district) of Spain and became part of the Viceroyalty of Peru with its capital in Lima (see Real Audiencia de Quito).
Main doorway to the Cathedral

The Spanish promptly established Roman Catholicism in Quito, with the first church (El Belén) built even before the city had been officially founded. In January 1535, the San Francisco Convent was constructed, the first of about 20 churches and convents built during the colonial period. The Spanish actively converted the indigenous population and used them as forced labor for construction, especially in the early colonial years. The Diocese of Quito was established in 1545 and was elevated to the Archdiocese of Quito in 1849.

In 1809, after nearly 300 years of Spanish colonization, Quito was a city of about 10,000 inhabitants. On August 10, 1809, a movement was started in Quito that aimed for political independence from Spain. On that date, a plan for government was established that placed Juan Pío Montúfar as president with various other prominent figures in other positions of government. However, this initial movement was ultimately defeated on August 2, 1810, when Imperial troops came from Lima, Peru, and killed the leaders of the uprising along with about 200 inhabitants of the city. A chain of conflicts concluded on May 24, 1822, when Antonio José de Sucre, under the command of Simón Bolívar, led troops into the Battle of Pichincha. Their victory marked the independence of Quito and the surrounding areas.

Just days after the Battle of Pichincha, on May 24, 1822, the leaders of the city proclaimed their independence and allowed the city to be annexed to the Republic of Gran Colombia. Simón Bolívar went to Quito on June 16, 1822, and was present at the signing of the Colombian Constitution on June 24, 1822. When the Gran Colombia dissolved in 1830, Quito became the capital of the newly formed Republic of Ecuador.

In 1833, members of the Society of Free Inhabitants of Quito were assassinated by the government after they conspired against it, and on March 6, 1845, the Marcist Revolution began. Later, in 1875, the country’s president, Gabriel García Moreno, was assassinated in Quito. Two years later, in 1877, Archbishop José Ignacio Checa y Barba was killed by poisoning while he was giving mass.

In 1882, insurgents arose against the regime of dictator Ignacio de Veintemilla. However, this did not end the violence that was occurring throughout the country. On July 9, 1883, the liberal commander Eloy Alfaro participated in the Battle of Guayaquil, and later, after more conflict, became the president of Ecuador on September 4, 1895. Upon completing his second term in 1911, he moved to Europe. When he returned to Ecuador in 1912 and attempted a return to power, he was arrested on January 28, 1912; thrown in prison; and assassinated by a mob that had stormed the prison. His body was dragged through the streets of Quito to a city park, where it was burned.

In 1932, the Four Days’ War broke out. This was a civil war that followed the election of Neptalí Bonifaz and the subsequent realization that he carried a Peruvian passport. Workers at a major textile factory went on strike in 1934, and similar unrest continues to the present day. On February 12, 1949, a realistic broadcast of H. G. Wells’ novel The War of the Worlds led to citywide panic and the deaths of more than twenty people who died in fires set by mobs.[7]

In recent years, Quito has been the focal point of large demonstrations that led to the ousting of presidents Abdalá Bucaram (February 5, 1997), Jamil Mahuad (January 21, 2000), and Lucio Gutiérrez (April 20, 2005).

Quito and the Pichincha volcano

Quito is located in the northern highlands of Ecuador in the Guayllabamba river basin. The city has been built on a long plateau lying on the east flanks of the Pichincha volcano. The valley of Guayllabamba River where Quito lies is flanked by volcanoes, some of them snow-capped, that can be visible from the city on a clear day. Some of the volcanoes on the Central Cordillera (Royal Cordillera), east of Quito, surrounding the Guayllabamba valley are Cotopaxi, Sincholagua, Antisana, and Cayambe. Some of the volcanoes of the Western Cordillera, to the west of the Guayllabamba valley, are Illiniza, Atacazo, Pichincha, and Pululahua (which has the Pululahua Geobotanical Reserve).
The 18,874 foot (5,753 m) stratovolcano Antisana, seen from Quito’s northern suburbs in July

Quito’s closest volcano is Pichincha, looming over the western side of the city. Quito is also the only capital in the world to be directly menaced by an active volcano. Pichincha volcano has several summits, among them Rucu Pichincha at 4700 metres above sea level and Guagua Pichincha at 4794 metres. Guagua Pichincha is active and being monitored by volcanologists at the geophysical institute of the national polytechnic university. The largest eruption occurred in 1660 when more than 10 inches (25 cm) of ash covered the city. There were three minor eruptions in the 1800s. The latest eruption was recorded on August 23, 2006, when a few puffs of smoke and a large amount of ash were deposited on the city. Although not devastating, the eruption caused significant disruption of activities, including closing of the international airport. It is unlikely that any serious activity will occur in the near future, and the topography of the volcano is such that, even if a major eruption were to occur, lava flows would head into the almost-unpopulated areas west of the volcano, sparing Quito, which lies to the east.

Activity in other nearby volcanoes also can affect the city. In November 2002, after an eruption in the volcano Reventador, the city was showered with a layer of fine ash particles to a depth of several centimeters.
[edit] Climate

Under the Koppen climate classification, Quito has a Subtropical highland climate. Because of its elevation and its proximity to the equator, Quito has a fairly constant cool climate, with spring-like weather year-round. The average temperature at noon is 19°C (66°F) with a normal night-time low of 10°C (50°F). The annual average temperature is 15°C (64°F). The city experiences only two seasons: dry and wet. The dry season, June through September (4 months), is referred to as summer; the wet season, October through May (8 months), is referred to as winter