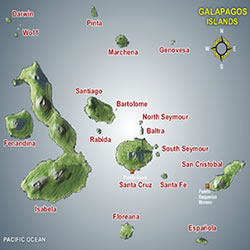 The Galápagos Islands (official name: Archipiélago de Colón; other Spanish names: Islas de Colón or Islas Galápagos) are an archipelago of volcanic islands distributed around the equator in the Pacific Ocean, 972 km west of continental Ecuador. It is a UNESCO World Heritage site: wildlife is its most notable feature.

The Galápagos islands and its surrounding waters are part of a province, a national park, and a biological marine reserve. The principal language on the islands is Spanish. The islands have a population of around 40,000, which is a 40-fold expansion in 50 years.

The islands are geologically young and famed for their vast number of endemic species, which were studied by Charles Darwin during the voyage of the Beagle. His observations and collections contributed to the inception of Darwin’s theory of evolution by natural selection.

The first crude navigation chart of the islands was done by the buccaneer Ambrose Cowley in 1684. He named the individual islands after some of his fellow pirates or after the English noblemen who helped the privateer’s cause. More recently, the Ecuadorian government gave most of the islands Spanish names. While the Spanish names are official, many users (especially ecological researchers) continue to use the older English names, particularly as those were the names used when Charles Darwin visited.