The road south from Quito to Latacunga and Ambato and then to Cuenca is the Pan American Highway, the Pananericana, and it runs through a long, fertile, central valley sometimes known as Volcano Alley. On either side of the valley rise parallel sets of mountains with nine of the country’s highest peaks . The volcanos of Cotopaxi, Tungurahua and Sangay. Pichincha Cotopaxi and Sangay are among the world’s top ten most active volcanos.

The volcanos of Ecuador elicit oohs and ahs from travelers, and with the eruptions in recent years, are sights. 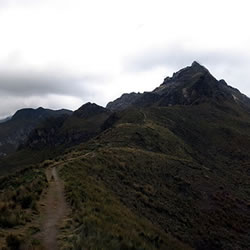 Pichincha is an active stratovolcano in the country of Ecuador, whose capital Quito wraps around its eastern slopes. The mountain’s two highest peaks are the Guagua (15,696 feet/4,784 m), which means “child” in Quechua and the Rucu (15,413 feet/4,698 m), which means “old person”. The active caldera is in the Guagua, on the western side of the mountain.

Both peaks are visible from the city of Quito and are easily climbed. Guagua is usually accessed from the village Lloa outside of Quito. In October of 1999, the volcano erupted and covered the city with several inches of ash. Prior to that, the last major eruption was in 1660, when about a foot of ash fell on the city.

The province in which it is located takes its name from the mountain, as is the case for many of the other provinces in Ecuador (Cotopaxi, Chimborazo, Imbabura, etc). On May 24, 1822, in the context of the war of independence of Latin American, Patriot forces defeated a Spanish colonial army on the slopes of the Pichincha. The encounter, known as the Battle of Pichincha, sealed the independence of the lands that constitute modern Ecuador.